Chemicals in the water

Posted on June 16, 2011 by livinginnatureengland

Unless you have been living under a rock you will have heard of found out that there are at least some substances in the tap water that are not good for you. Some people go the extra mile and say the government medicates the water by design to control society and keep their subjects weak, deprived and demoralized and i have heard many references including the holocaust were the natzi government added chemicals such as fluoride to the water to lower the conscious into a less aware mode making it easier to fulfill the ethnic cleansing of the region. Obviously this is a theory to be researched not something to think is 100 percent fact. Anyway on with the blog on contaminants in the water.

Here is a list of just a few of the chemicals routinely added to our water supply: 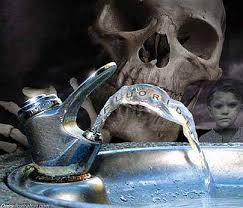 Remember there are different substances in each country and the amounts vary depending on factors like age of the pipes and the elected representatives thoughts for example there are many cases where councils or towns have banned water treatment chemicals being added.

Even if the water leaves the source in a relatively clean state, don’t forget that your water travels through pipes, which may have been underground since Victorian times. It is almost impossible for the water not to become contaminated by something undesirable.

There is alot of debate from researchers about what is the best water filter and many subjects such as minerals, sterilize, energy and cost are thrown around to stand for or against a certain water filtration technique. There is also alot of research to show that a warm shower is alot more dangerous than drinking the water due to the hot water opening skin pours and the shower gas coming off with small particles being absorbed into the body through the skin and face.

Sign up for the newsletter – Send a email titled newsletter to us via the contact us page.

The Blog of Author Tim Ferriss

A professional source of nutritional information. Nutrition: Hacks for your health

Day in the life of a little lady with a life goal to inspire.
Bio-Sil South Africa
Slight Edge Performance Program BLOG

Education is KEY Knowledge is POWER

The more you know, the better off you will be...

Just five trillion trees to save the planet!

Practical, positive, caring choices for a world that works for everyone.